Just a few years ago, whilst at University in Newcastle, highly acclaimed UK music producer D-Boy was handed three digitally re-mastered CD’s of the Sholay soundtrack by his buddy Manoj. This collection includes the entire sound package for the movie: music, songs, dialogue, sound effects. Anything and everything you hear in the film.

Years later, plus a pair of Pioneer CDJ’s and Logic Pro, D-Boy has produced an original mixtape built on the film’s sound package from two recording studios, one in London and his 2nd base in Toronto, Canada.

The sound bites includes footsteps, pigeons, chimes, swinging chains, and some classic intro and outro film dialogues. The score for Sholay was composed by the legendary R.D. Burman; however, the sound design was done by Filmfare award winner S.Y.Pathak along with Baba A.Majid, the sound assistant.

It is important for Pathak to be credited for Sholay’s melancholic soundscape, which contributed to the authentic American Western gritty feel.

Sholay, meaning Embers, like glowing hot coal, was released on Indian Independence day in 1975. The film was loosely styled after Akira Kurosawa’s 1954 film ‘Seven Samurai’ and was shot in the rocky terrain of Ramanagra, a town near Bangalore, Karnataka.

Sholay was considered a box office failure, yet through word of mouth became a success. Today Sholay is deemed one of the highest grossing Indian film of all time, running for more than five years at Mumbai’s Minerva theatre, and has a total adjusted gross of $49 million! 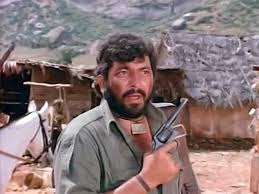 The famous Gabar Singh was actually based on real life criminal by the same name, who was a real life menace to society in a village called Gwalior in the 1950s