Lovin’ In Your Eyes sees the boys sticking true to their musical heritage, and distinctive sound. Growing up immersed in a world of R&B and Soul, the band deliver a song full of acoustic vibes with rousing violins and seductive harmonies. Lead singer Raise then lays his effortless vocal on top to create the new sound for the coming months.

The single focuses on the interactions between the singer and the protagonist, where a clear connection is established but cannot be reciprocated due to another’s presence. The link is realised through the eyes, the window to the soul, and earnestly relayed through the lyrics, showing the bands song writing capabilities and musical stylings. 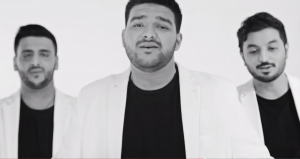 The107 are one of those bands that have quickly risen to our attention due to their raw vitality and stunning ability to perform live. Sunny, Shinh & Raise have performed at some of the biggest events on the Asian music calendar such as BBC London Mela, as well as being the only band to be asked by presenter Tommy Sandhu (BBC Asian Network) himself to perform an hour long live session on his breakfast show, and having their music listened to by inspirational artists such as Pharrell Williams (I Am Other) and Montell Jordan. This band are definitely ones to watch for the year, and will be performing around the UK throughout 2015.